[trans] 101220 JYJ's New Leap "The Broadcasting Restrictions Are A Shame"

Unable to engage in regular activities due to problems with their former agency
Their album will be released in the US early next year, followed by a world tour
They are honest and austere. The three members of JYJ, Jaejoong-Yoochun-Junsu, are passionate youths in their mid-20s, no different from their peers. When we asked Yoochun, who recently starred in the drama as the lead role, "We enjoyed your drama. Do you plan on taking on a non-historical, modern drama?" he gave us a taste of his 'lame humor' by saying "Hyundai Geuk (modern drama), Kia Geuk, Samsung Geuk..." Everyone burst out in laughter a beat late. 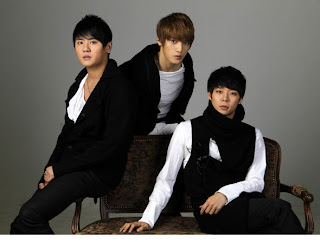 But when we brought up the topic of their legal dispute with SM Entertainment, the agency of their former group TVXQ, a shadow was cast on the three youths' faces. Last July, the three members filed an exclusive contract suspension injunction stating that, "13 years for the contract length is too long, and we have not been receiving just treatment with regards to things such as income distribution from album sales." The Courts ruled in favor of JYJ that, "Until the verdict on the lawsuit is made, SM cannot interfere with the trio's independent activities in the entertainment industry," and the lawsuit on the exclusive contract is currently underway. With regards to the reason of why they filed the lawsuit, Junsu stated, "It wasn't just because of the unjust nature of the contract," and "We were hurt and scarred by the agency in areas where we put our trust in them so we began to think about searching for a happy life."
Though JYJ released their first album in October, they have not been able to engage in regular activities due to many problems, including SM claiming that JYJ are locked in a 'dual contract'. The Korean Federation of Pop Culture and Art Industry sent an official document to broadcasting companies requesting that they refrain from giving JYJ appearances on their shows. Junsu stated, "It's a shame and it's frustrating that we don't have the freedom to appear on TV like other singers. Because our relationship with AVEX, who was in charge of our Japanese activities, no longer exists, our door to Japanese activities is blocked as well."
They are currently holding activities after signing on to an agent contract with CJeS Entertainment. What is different from before? "Everything that we thought was unjust has been fixed. We feel a greater sense of accomplishment because everything revolves around our opinions, no matter what it is. We've learned to be thankful of even the small things that we used to easily brush off before." (Junsu) "Each and every detail on the album, from the cover to the recording and mixing of the songs, was decided upon through discussions between the agency and the three of us. The thought that 'Doing things this way is really nice' was reinforced through the process." (Jaejoong)
"Back when we were TVXQ, there was too much work and no time to spare. When we were working on an album, the staff, excluding us and our composers, would hold discussions and just send us their decisions on everything." (Yoochun)
The trio decided to include songs composed by each of them in their album. Junsu stated, "We enjoy writing songs, but we won't insist on having to include songs composed by ourselves," and "What matters most is that we're singing good songs, regardless of whether it was us who wrote the songs or not." In their first concert on the 27th and 28th of last month, they sang Jaejoong's new composition 'Nine'. It is a song about the nine years the five members of TVXQ have spent together. "When I look back on the past nine years, there were times when we shined and there were times when things were rough... It's hard to express it all in one sentence. What I included in the song is only a small portion of what I feel." (Jaejoong) "If we were to express in song, everything that has happened till now, we'd need to compose at least 500 songs?" (Yoochun)
The trio still have a strong attachment to 'TVXQ'. When asked about their feelings on U-Know Yunho and Choikang Changmin's comeback as TVXQ next year, Jaejoong stated, "We support them and we hope all goes well for them." But he also added that, "But we do feel sad that they're using the name TVXQ. Because we think that TVXQ can only truly be TVXQ when the five members are together, we decided to use another name. TVXQ is a name that is as valuable to us as our lives." Yoochun added, "Though we are currently facing many difficulties, we are always open to the possibility of a TVXQ reunion," and "That would be like Utopia for us."
JYJ will be kicking off their US activities with the release of their album in the US early next year. Jaejoong stated, "While we're in the US, we'll be working on some music and holding a world tour." Junsu sounded bitter as he stated, "There is the aspect that due to the restrictions on our domestic activities, we've had to entirely focus our attention on overseas activities."
We asked them one final question. We asked them whether or not they felt sad that other singers were reaping the rewards of the hard work the members had put in to get the 'Kpop' wind blowing in Japan as JYJ are unable to perform there.
"Not at all. We were able to be loved in Japan thanks to BoA and Bae Yong Joon. If what we've done benefits our juniors, then that's something to feel good about. If our juniors to well and the Japanese market expands, we might be able to perform in Japan again." (Junsu)
Source: [hankyoreh+DNBN]
Translation credits: jeeelim5@tohosomnia.net
Shared by: tohosomnia.net
Do not remove/add on any credits
Posted by JYJisJYJ