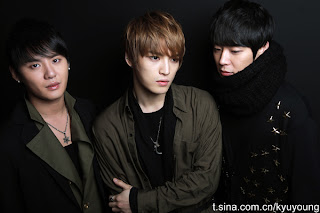 June 2009 witnessed one of the biggest controversies in K-pop history, as three members of TVXQ - Jaejoong, Junsu, and Yoochun - decided to withdraw from their agency, SM Entertainment, and file a lawsuit against them for being locked in ’slave’ contracts. Soon after, a new trio was formed under the name ‘JYJ‘, who have been actively promoting their new worldwide album, ‘The Beginning‘.When the three were asked about their decision to walk a different path, the members confessed that they’ve been so busy that they could only concentrate on their JYJ schedules.Yoochun explained, “For a while now, we’ve been going back and forth between Korea and Japan for promotions. We had concerts in both countries, as well as our individual activities. We didn’t want to think about other issues, which is why we put in effort to keep ourselves preoccupied.”Feeling that SM Entertainment was causing them undue suffering during their time as TVXQ, the trio finally put their foot down last year and made the weighty decision to withdraw from the company. During the difficult time of their lawsuit, they had only each other for support. But that’s not to say that they didn’t have something to fill their void before meeting with their current agency – the boys had activities with their Japanese agency, AVEX, up until the end of last year.Jaejoong reflected, “It’s still the same now, but we never had an opportunity to voice out our perspective, and we tried to be really careful. This was during the time when there were all sorts of rumors going around in Korea. In that kind of situation, it was difficult for us to willingly approach news reporters ourselves. It was a situation when just one comment could become a huge misunderstanding and receive criticism, because saying anything would have hurt a lot of people. It was only afterwards when the legal proceedings were complete that we could finally begin to talk.”After their promotions in Japan, JYJ finally decided to release a new meaningful album titled, ‘The Beginning’. However, due to circumstances with their visas, the trio had no choice but to hold free-entry showcases for their fans in the U.S. Fortunately for JYJ, their misfortunes later turned into a blessing.Junsu recalled, “We couldn’t even imagine that so many fans of different races would come to our concert. It was a sight that you could only see at concerts from pop stars like Michael Jackson, where fans of all ages came to watch. In the beginning, there were a lot of people who looked at us with blank faces because they didn’t know the songs. But later on they started to move their bodies and get into the groove, even praising us with a thumbs-up. It was definitely a different feel from our fans in Asia.”Having free showcases allowed them to expose their music to a wider range of people. Well-known, global producers such as Kanye West helped produce three of their tracks, including ‘Ayyy Girl‘, ‘Empty‘, and ‘Be My Girl’. Other songs in their album were produced directly by the members themselves: ‘Still in Love’ was produced by Jaejoong, ‘I Love You’ by Yoochun, and ‘I Can Soar‘ by Junsu.Jaejoong elaborated, “They are all tracks in the traditional pop sense. This is something we were trying for the first time, but at the same time, we weren’t trying to change our style. We wanted to turn back to the origins of music. We went to America to personally work with producers. During that time, Yoochun was filming his drama and probably had a really difficult time.”The members expressed that they would like to keep concentrating on their States-side activities. Junsu concluded the interview with some final thoughts on their American career: “We haven’t even officially released our album in America, as it’s only sold on iTunes for now. We heard that our song was picked by readers of Billboard as one of the ‘Top 10′ songs of the year – we came 5th. Seeing Kanye West and Lady Gaga getting 10th and 7th respectively, we were very surprised.”
Source: Worldwide Daily News
Credits: Allkpop
Shared by: The Beginner
Posted by JYJisJYJ