Billboard Release Of The Week: JYJ “The Beginning” 101021 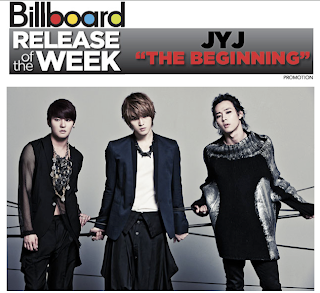 As former members of the South Korean boy band TVXQ, the trio of Kim JaeJoong, Park YuChun and Kim JunSu are no strangers to pop stardom. Formed in 2003, TVXQ became hitmakers at home and in K-pop-crazy Japan (where it was known as Tohoshinki) and elsewhere in Southeast Asia. Following a contractual dispute with its former management company, the threesome formed a new group earlier this year that it christened JYJ after the first initials of their first names. The band’s debut album, aptly titled “The Beginning,” is out now.
JYJ is thinking big with its debut album, “The Beginning,” which features collaborations with Kanye West and songwriter/producer Rodney Jerkins. Show Shop Entertainment released the album Oct. 14 through Warner Music Korea. In the United States, Warner Music is releasing the album digitally through iTunes and Amazon with a CD release planned for late 2010 or early 2011.
ON THE PAGE
“The Beginning” comprises seven tracks and three remixes. Each of the members of JYJ has songwriting credits on the album. Show Shop Entertainment and C-JeS Entertainemnt handles JYJ’s publishing, with administration by Warner/Chappell Music Korea.
IN THE STUDIO
JYJ had a wish list of producers and artists it wanted to work with, according to Park: West, Jerkins, Neo and Timbaland. With the help of its manager, Baek Chang Ju, CEO of C-JeS Entertainment, and Show Shop Entertainment CEO Hwang Jong Wook, the group was able to connect with West and Jerkins, who agreed to work with JYJ on “The Beginning.”
The sessions for the first single, “Ayyy Girl,” produced by West, were held at Westlake Recording Studios in Hollywood, while “Empty” and “Be My Girl,” produced by Jerkins, were recorded at his 2nd Floor Studios, also in Hollywood. The rest of the tracks were recorded in South Korea.
West wowed JYJ with some a cappella freestyle rapping before the trio began recording its vocals. “We could see why he’s so hugely popular,” Park says. “It was really a great honor to work with him.”
Jerkins also made a big impression on the Korean trio. “When we were making songs together, he treated us like equals,” Park says. “We appreciated that so much. Because he worked so hard on the record, he inspired us to work hard.”
Jerkins says he was impressed by JYJ’s professionalism and “their poise, the way they took their work seriously. I told their team that I’d work with them again.”
IN THE STORES
“The Beginning” arrived Oct. 14 in South Korea, followed by the release of a “luxury edition” with extra content on Oct. 18. The expanded version is limited to a run of fewer than 100,000 units, but Warner Music Korea says it received more than 300,000 pre-sale orders for the set. “The overwhelming response to the [limited-edition] CD is a very encouraging start for JYJ and we hope that this album release will also be met with equal enthusiasm,” Warner Music Korea managing director P.R. Wang said in a statement.
Warner Asia’s Wong adds: “Warner U.S. will release the product digitally through iTunes first this month. It will also be made available through Amazon digitally. There will also be finished product under the Amazon import section. We are in discussion with Warner U.S. to release a U.S. version in the next few months that will include new tracks and mixes exclusive to the market in both physical and digital formats.”
ON THE ROAD
JYJ is playing shows in Bangkok, Thailand; Singapore; Kuala Lumpur, Malaysia; Hong Kong, China; and Taipei, Taiwan; in October. The group “also will be touring four major cities in the U.S. in November to support the release in a series of meet-the-fan sessions, plus a few media appearances,” Wong says. “Once the U.S. release [plans for the physical album] has been decided, we hope to reach a much bigger market for JYJ, as the market for Asian acts who sing in English is growing rapidly.”
Source: [Billboard]
Shared by: tohosomnia.net
Posted by JYJisJYJ No comments:

JYJ Donates Proceeds From Showcase, Billboard Release Of The Week: JYJ “The Beginning” 101021 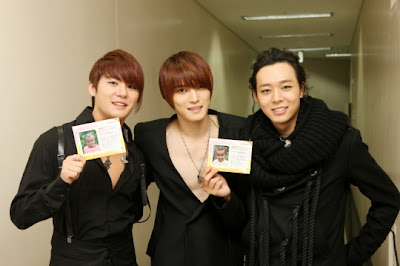 JYJ (TVXQ’s Jaejoong, Yoochun and Junsu) are currently doing activities for their debut album 「The Beginning」. This time, they have donated KRW30,000,000 from the proceeds of their showcase to the 「Children’s Welfare Campaign」 by the international relief organisation 「World Vision」.
On the 17th, JYJ also donated USD$10,000 from the proceeds of their showcase in Kuala Lumpur, Malaysia, to the underprivileged local children. Also, on the 23rd, they will be participating in the 「East Asia Fei Yang Concert」 in Shanghai, where all the proceeds will be donated to the Red Cross.
JYJ have displayed impressive stages to more than 20,000 fans in Thailand, Singapore and Malaysia. In November, they will be performing in 4 cities in the United States.
Source: [chosunonline]
Translation credits: mandasoh@tohosomnia.net
Shared by: tohosomnia.net
Do not remove/add on any credits
Posted by JYJisJYJ No comments:

welcome to twitterland my boys

my wish has been fulfilled by JYJ..i ady talked to myself that if got signing session at the SC,i'll tell JYJ to make twitter acc.but at last,they DID it!!yay!!


Yoochun's conversation with Jaejoong
@6002theMicky Yoochunㅠ
@mjjeje You're right next to me right now, so why do you say Yoochun...tsk!!!
Jaejoong tweets to Yoochun
Yoochun... All the pictures I just took got deleted☹
Yoochun's conversation with Junsu
(Junsu) The person who has enticed me to join Twitter, Yoochun... How could this be.. I haven't done something like this before..
@0101xiahtic Junsu, what do you mean 'enticed'?... I just guided you^^!!
@6002theMicky Um... I registered ..but I don't get what's what at all... ㅠ
Yoochun is confused to why Jaejoong and Junsu are tweeting to him instead of talking to him:
@mjjeje Hyung, you're sitting next to me right now... say it in words - - hahaha (He's telling Jaejoong to talk to him, not tweet to him)
@0101xiahtic Junsu... That goes for you too, you're sitting behind me...
Jaejoong and Junsu's replies (in order)
@6002theMicky Because I'm using Twitter right now, because you're sitting next to me, it makes me feel all the more unwilling to say all of this in words haha
@6002theMicky kekeke Oh ho!!!!!
Junsu @0101xiahtic is now following Jaejoong!
@mjjeje Oh, I'm following you now, it worked..
@0101xiahtic Junsu, it's so, so difficult ㅠ And my mobile phone must be messed up, it's slow
Jaejoong's Tweet updates
A bonus picture of Jiji. Ah Shanghai, long time no see!
Yes, I remember that in China, I'm Jjai Jjong (Zhai Zhong)!
Yoochun Tweet Updates and Junsu's conversation with Kim Ye Eun
(Cast member of Dr. Champ(?) guessing by her cyworld. I think they're close friends)
@0101xiahtic Who are you.... to have a Twitter.........................
@iamyenny8 Follow me (which she did)
then
(Junsu) My cute Tigger, Leo and Bakira haha
@0101xiahtic They've grown a lot kekekekekekeke those kitties (she calls them 똥고양이들, which is like, a jokingly mean way of saying kitties)
@iamyenny8 They're... better than your Simba..
(P.S. Junsu's been talking in olden Korean to her, like the SungKyunKwan Scandal-talk. I think Yoochun is rubbing off on him XD)
Yoochun's reply to Junsu's cat pics
Then I'll show off Harang!!
Another tweet by Yoochun
@seojinyi Our hair designer... who thinks she's a beauty!!!
Junsu uploads a picture of himself
Super "V"!!!!! Eukyangkyangkyang(his laugh >,<)
Yoochun tells Cha Oreum to lose weight and get married!
@zzzkissme Ms Oreum... Lose some weight!!!! You have to get married a.s.a.p.!!!! What are you doing!!! Your weight keeps rising? (Oreum is phonetically equal to 'To rise' in Korean)
Jaejoong Twitter update
@zzzkissme Ms Oreum, I think I've gotten used to Twitter now ^_^
Source: [Jaejoong's Twitter+Junsu's Twitter+Yoochun's Twitter+Others]
Translation credits: jeeelim5@tohosomnia.net
Shared by: tohosomnia.net
Do not remove/add on any credits
EDIT
Jaejoong is unable to type Japanese on his phone
I can't type in Japanese with this mobile phone ㅜㅜ
DOUBLE EDIT
Kang Sung Pil tweets to Junsu
@0101xiahtic Junsu~~It's Sung Pil Hyung~~ Follow me too~^^* Good luck on your showcase^^*
TRANSLATOR'S NOTE: Tohosomnia will compile one master post every day of JYJ tweets that gets updated with every new tweet of theirs :) This post in the master post for October 22nd :) KST
MORE UPDATES
What's wrong, Jaejoong?
(Jaejoong) Today is a really sad day that brings tears to my eyes... It feels like the world has crumbled..
(T/N: We've just learned that Park Yong Ha's father Park Seung In has passed away... Our deepest condolences)
Junsu's Twitter Update about his cat (again XD)
(Junsu) Our Leo!!! Isn't he cute~ hahaha
Posted by JYJisJYJ No comments: