[trans] 101218 Yoon Shi Yoon-Park YooChun, "Will They Both Receive The Best Newcomer Award" 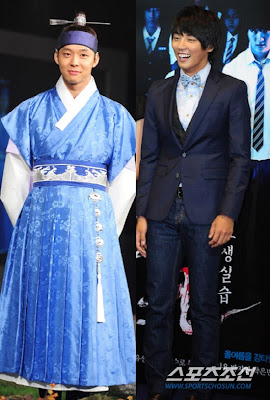 Fans of 'Kim Tak Goo' Yoon Shi Yoon and 'Young Master Seon Joon' Park Yoochun are drawing attention as they are locked in a subtle war of nerves for the Best Newcomer Award.Yoon Shi Yoon and Park Yoochun, who were loved as Kim Tak Goo in 'Baking King, Kim Tak Goo' and Lee Seon Joon in 'SungKyunKwan Scandal' respectively, were both recognized for their work and have both been listed as nominees for the Best Newcomer Award at the 2010 KBS Drama Acting Awards. It seems the competition will be stiff because both of them were at the center of their dramas' popularity and had stable acting skills that shined. This is why the fans and 'Kim Tak Goo' and 'SKK Scandal' maniacs are already drawing up comparisons between the two stars and lighting a fire under the competition.Both Yoon Shi Yoon and Park Yoochun deserve the Best Newcomer Award. Yoon Shi Yoon played the lead role of 'Kim Tak Goo' in the drama that had the highest viewer ratings this year. As his drama was the most popular drama of the year, KBS has been wondering whether they should place Yoon Shi Yoon under the Best Newcomer Award category or the Excellence in Acting Award category. One representative stated, "We were debating right up till the moment we finalized the nominees list, but in the end, we placed him under the Best Newcomer Award category as it has not been long since he debuted and as this is his first drama at KBS."Park Yoochun's 'SKK Scandal' loses to 'Kim Tak Goo' in terms of ratings, but the actor has been singled out for the drama's continued popularity even though the drama has ended. Though this was his first attempt as an idol star at a traditional drama, he is being applauded for not once being swept in a controversy regarding his acting as it was very stable throughout the entire drama. The KBS Drama department should also be thankful that JYJ, of which Park Yoochun is a member, have chosen to have their TV debut at the 2010 KBS Drama Acting Awards.This is why fans are on two sides that, "Park Yoochun should receive the Best Newcomer Award," and "Yoon Shi Yoon deserves it more," but there are many representatives in the entertainment industry predicting that both of them will win the award. One representative stated, "It is true that there are less instances of two people receiving the same award at the KBS Drama Acting Awards compared to other awards shows. However, the competition was fierce for the Excellence in Acting Award last year so Kim Seung Woo and Jung Joon Ho, and Goo Hae Sun and Kim Tae Hee became co-recipients of the award. So I believe it would be best if both actors receive the award this year."
Source: [sports chosun+Yuaerubi]
Translation credits: jeeelim5@tohosomnia.net
Shared by: tohosomnia.net + The Beginner
Posted by JYJisJYJ