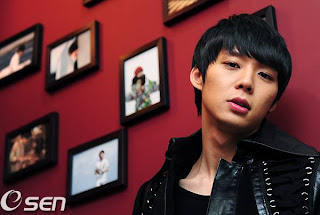 JYJ’s Park Yoochun recently revealed an ironic twist to the story involving himself and actress Park Min Young. It turns out that although relationship rumors emerged about the two, they actually became closer because of them.During an interview, OSEN asked, “Not long ago, there was a scandal with your co-star for the drama ‘Sungkyunkwan Scandal‘. How did you feel about that?” Yoochun replied, “When I first heard about the relationship rumors, I thought, “I’m guessing it’s not that big a deal.”He continued, “However I realized later that those one or two articles multiplied into a huge number. I was surprised. But I actually became closer and more comfortable with Park Min Young after that.”“Usually when there are dating rumors about stars acting in the same drama, there are a lot of cases when their relationship becomes strained – so it’s unusual for us to have gotten closer. We just got more comfortable with talking to one another. I’m glad we got closer.”When asked about his future goals on tackling both his acting and singing simultaneously, “If there was a difference between singing and acting, singers show their everything in one performance, while actors distribute it out slowly. I take joy in entering roles. After living as Lee Seon Jun for a while, I actually found stress relief from expressing a personality that I never had.”In a request to send a message to his fans, Yoochun expressed, “As the hopeful 2011 approaches, even if I’m having a hard time now, I don’t want to talk about the past. As JYJ, we’re prepared to show just how hard we can work, and display ‘the furthest of efforts’. I also would like to naturally meet with our fans. We will be having fun with our promotions next year, so please watch over us.”
Source: OSEN
Credits: Allkpop
Shared by: The Beginner
Posted by JYJisJYJ