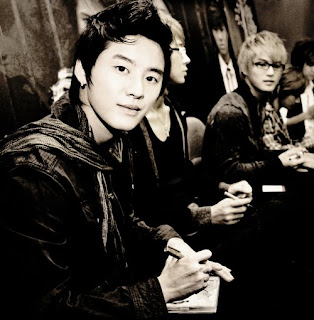 Some time ago, Kim JunSu accepted an interview with the Korean media, and talked about the circumstance of him raising kittens recently.Due to the influence of fellow member Kim JaeJoong, Kim JunSu has also recently started to raise kittens. Despite him having a slight allergy,all that he need to do is to watch over the kittens, and he said he would feel as if he was watching over his own children. "Because it's an independent life, I always feel lonely. And so I bought the kittens last week. Compared to puppies, kitten faeces are easier to take care of, and also they would not bark like puppies do. Considering that I am often not at home, I felt that raising cats were the most suitable choice.""If you raise cats, wouldn't they always be staying at home? Raising a cat especially, it's always like returning to the house where the cats live." Upon facing this question from the reporter, Kim JunSu said, "Even though the number of pets at home is quite a lot, but due to a fairly large home, it will not be that dirty. Now when I go home, it’s really good not to have the feeling of loneliness anymore. Every time when I open the door, the kittens would run out to greet me. And after bathing, I will also see them at the door looking at me with their big round eyes wide open.""Raising four kittens, is that too many?" "Compared to raising only one, I would think of not leaving them. I had wanted to raise yet another two more, but the members (of JYJ) opposed, and in the end I gave up.""Because I'm raising a total of four cats, I have also spent a lot on buying their food. I should have made them exercise more, but in the end it did not succeed and (they're) growing so quickly, about as big as a mountain goat. So, now I plan on following JaeJoong hyung’s footsteps and buying a treadmill to let them exercise moderately."On the other hand, in the case of Park YooChun, he is only raising a dog. "He has allergies to both cats and dogs, and even if a dog owner were to pass him by, he would start coughing. But now, he has been able to slowly adapt to it.”
Source: ameblo + tvxqlover.com + BaiduTVXQTranslation: tvxqhwaiting @ OneTVXQ.comCredits: OneTVXQ.com { One World. One Red Ocean. One TVXQ! }Feel free to repost, but please leave the full credits intact. Thanks!
Posted by JYJisJYJ