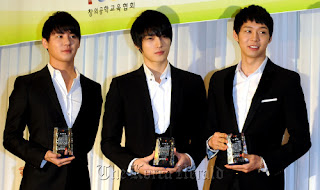 Mired in a never-ending string of scandal-driven buzz, JYJ ― the boy band formed by three TVXQ idols-gone-independent ― put in a brief press appearance for their appointment ceremony as goodwill ambassadors for the robot competition, FLL KOREA.

A mere eight days had passed since S.M. Entertainment’s three-less TVXQ ― currently helmed by U-Know and Max ― dropped their controversially-titled album, “Keep Your Head Down,” on the masses.

The album jumped to the top of the charts, with the album’s title fueling a scandal-heavy fire about a potential battle of the bands between JYJ and TVXQ.

What started off as a lawsuit filed against S.M. Entertainment by Park Yoo-chun, Kim Jae-joong and Kim Jun-su over their 13-year contract in July 2009, led to rumors about the possible disbandment of the popular five-member boy band.
Releasing an album, aptly titled “The Beginning” ― which included a much-hyped collaboration with famed rapper-and-record producer Kanye West ― that was aimed at a global audience, the trio then followed it up with a music essay featuring their own compositions and unreleased tracks. Little did they know that a song from the essay would spark speculative buzz about whether or not some of the lyrics were aimed at S.M. or U-Know and Max.Then, when TVXQ released their album on Jan. 5, rumors spread that the title of the S.M. duo’s new release was an indirect and aggressive warning to JYJ, telling the trio to keep their heads down. When Park Yoo-chun, Kim Jae-joong and Kim Jun-su made their public appearance Thursday, they gave no indication that such rumors had affected them. Decked out in matching black suits, Park and the two Kims gave off an air of unified solidarity as they posed for pictures at the Grand Hilton Seoul in Hongeun-dong on Thursday. Looking unintimidated by all the media attention that has been trailing them into the new year, they focused on their roles as goodwill ambassadors for the competition, which is slated to be held at Ilsan’s KINTEX on Jan. 29. Reporters were restricted from asking questions during the event, but that did not remove the massive elephant in the room, a silent presence amplified by FLL KOREA project manager Nam Lee-joon’s innocent question, “Do you all do Twitter?” To which the trio responded, “Yes.”Nam then suggested that JYJ express their interest in FLL KOREA via their Twitter accounts. The brief exchange recalled the controversy fueled by a recent tweet posted by Kim Jun-su and what the press interpreted as a potential ensuing response by S.M. members that gave rise to speculation about heightening tension between the entertainment company’s brethren and the trio. In the midst of all the brouhaha, all five idols have been forging ahead: Park Yoo-chun showed off his acting chops in KBS’ “Seonggyungwan Scandal” last year; Kim Jae-joong put in an award-winning performance in a Japanese drama; Kim Jun-su will be in a musical starting February; Max is starring in SBS’ “Paradise Ranch” and U-Know will be starring in the upcoming television drama, “Poseidon.” FLL KOREA is organized by the FEST Creative Engineering Education Association, part of the global competition called the FIRST LEGO League. This year’s challenge, called “Body Forward,” asks participants to delve into Biomedical Engineering to look into improving one’s physical health. By Jean Oh (oh_jean@heraldm.com)