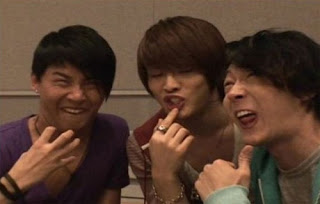 JYJ Youngwoong Jaejoong, Kim Junsu, and Park Yoochun transformed to Mr. Hyde.Recently through an on-line community the picture of JYJ members having bizzare facial expression was released and has been a hot topic.The picture captured the three members having various bizarre expressions thus attracted a lot of attention. Netizens especially noticed Park Yoochun who exactly had similar expression that reminiscent to Mr. Hyde (from Dr. Jekyll and Mr. Hyde). While Kim Junsu’s sulking face and clown-face like of Kim Jaejoong also arouse laughter to all netizens for their amazing expressions.Netizens who saw the pictures left various reactions such as “This is unbelievable. I almost couldn’t recognize Park Yoochun.” “Once I saw it, I said ‘who is this?’” “They’re still adorable” “Things like this make people have no choice but to love them.”Meanwhile on the coming 30th, JYJ will appear at ‘KBS Live News Time’ to tell stories about their US activities, preparation for New Year’s gigs, and are planned to send out messages to all fans.
credit: news.natetrans by: sharingyoochun.net
shared by: The Beginner
Posted by JYJisJYJ