[news] 101229 JYJ will Have Guerrilla Date with Fans in Myeong-dong, Broadcast by KBS TV 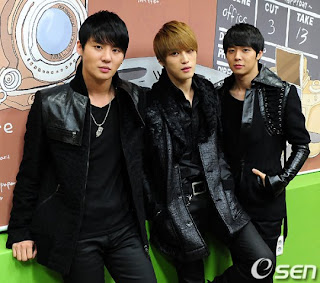 Group JYJ (Jaejoong, Junsu, Yoochun) is planned to surprise fans in Myeong-dong by holding a Guerrilla date.JYJ representative confirmed on the 29th, “On the 30th afternoon, JYJ will have a Guerrilla street date with fans in Myeong-dong. The event is going to be aired by KBS 2TV ‘Live Nationwide News’ afternoon broadcast.” he also added, “On the day, the 25-years young men JYJ are also expected to share an honest talk regarding their whereabouts and convey plan for future activities. Through this free public meeting, fans are able to have time communicate with them more closely. Each members will be given time to prepare their special year-end gift as well.”On the 31st after JYJ greeted audiences through ‘Live Nationwide News’, few hours later after the opening of ’2010 KBS Acting Awards’ the members are advancing to stand on stage for an expected brilliant performance.JYJ will also make appearance at ‘KBS Live News Time’ on December 30th in the morning and in January next year they’ll get the second SBS broadcast at ‘Good Morning’ to have talk show with fans.With the news of subsequent national broadcasts for JYJ despite their activities being disrupted by the problem with their former agency SM Entertainment, it seems the group has now run to a better condition thus put their fans in delight.Meanwhile, the members have planned a fan service by releasing a Korean album that consists their own self composed songs. This album includes songs the members performed in their previous concert and even more new songs.
credit: OSENtrans: sharingyoochun.net
shared by: The Beginner
Posted by JYJisJYJ