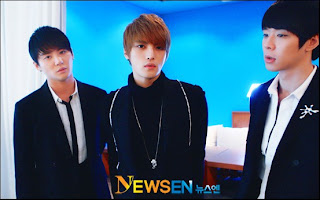 JYJ will be making their first public broadcast appearance of 2011 on SBS’s “Good Morning.”A SBS representative revealed on December 27th, “JYJ recorded for ‘Good Morning’ today. While discussing possible celebrities that will be promoting in 2011, we decided to request JYJ’s appearance. The trio finished about an hour and a half of footage and still have additional recording left.”The trio will also be performing for the first time on public broadcast through December 31st’s KBS’s “2010 Drama Awards“. These two confirmed appearances have industry representatives speculating over whether JYJ’s door of opportunity is slowly widening.Regarding the speculations, CJES Entertainment carefully replied, “At this time, we’re aggressively working towards getting JYJ on public broadcast shows.”
“Good Morning” will air January 5th, 2011.
Source: Newsen via Nate
Tip: k.ftw
Credits: Allkpop
Shared by: The Beginner
Posted by JYJisJYJ