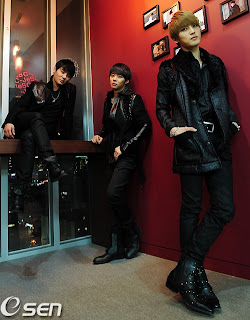 As they await their first public broadcast performance through KBS’s “2010 Drama Awards,” JYJ confessed to Osen that they were very excited for the stage.Sitting down for an interview with the news outlet, the reporter asked, “You’ll be going public for the first time on December 31st, how do you feel?”With bright smiles, they replied, “It feels like we received an extremely big present. It wasn’t easy for us to go on public broadcast programs because of the situation we’re in, so we’re thankful for all those who’ve waited for us. We’d also like to thank the broadcast representatives who consistently asked why we couldn’t appear in Korea, and to Yoochun, who gave us an opportunity to perform at the ceremony because of his participation in ‘Sungkyunkwan Scandal‘.”They continued, “Even with just one broadcast appearance, we’re really very thankful. It feels like we’ve returned to our mindset from our rookie days.”When asked whether they had anything special prepared for their first performance, JYJ replied, “It’s a ballad song, so without any impressive show effects, we’ll be doing our best in singing the song.”JYJ will be performing “Found You” at the ceremony scheduled for December 31st.
Source: OSEN via Nate
Credits: Allkpop
Shared by: The Beginner
Posted by JYJisJYJ