[TRANS] 101030 Celebrities Are Also Tuning In To SKK Scandal

Amongst the viewers in Korea who fell for the attraction of “SungKyunKwan Scandal”, celebrities are also included in this loyal group of viewers.Kang Soo Jeong, who stated that she is a loyal fan of Lee Seon Jun (acted by Park Yoochun), is one of them. She even went to catch the JYJ showcase in Hong Kong held on the 24th of October. Soo Jeong wrote, “I think I would cry after next week”, indicating her regrets for the broadcasting of “SungKyunKwan Scandal” that is coming to an end.There are also many other female artists who are captivated by the charm of Park Yoochun. Kim Tae Hee once stated that she came to know about Park Yoochun through “SungKyunKwan Scandal” and has been paying special attention to him since then. In an interview, Lee Yo Won also revealed that she was very surprised by Park Yoochun’s acting and that he is very suitable for the role of Lee Seon Jun. 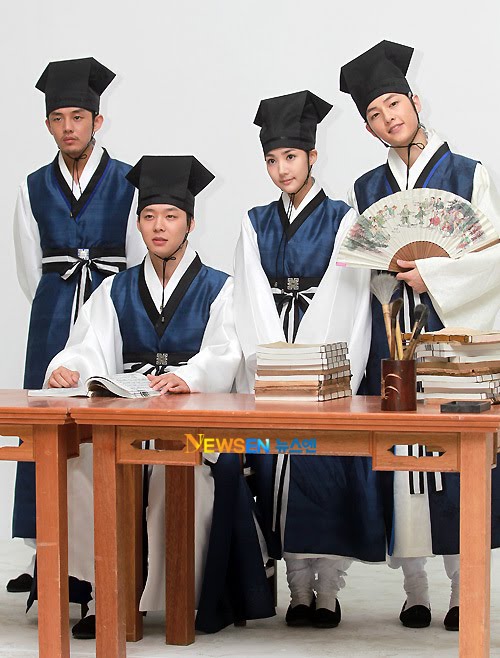 There are also many artists that fell for Geol-oh’s charm. YounHa, who’s preparing for her comeback as a singer, also stated in her Twitter page: “Though I’ll be very busy preparing for the concert, I still have to watch ‘SungKyunKwan Scandal’ even if it’s the repeated broadcast.” She also revealed that she’s mesmerized by the charm of Geol-oh acted by Yoo Ah-In. Male actor Song Il Guk also praised the acting of his junior actors via Twitter, and stated that he’s a loyal viewer of “SungKyunKwan Scandal”.Director of the drama series has expressed his gratitude for the love and support given to “SungKyunKwan Scandal”, and that though a lot of people may feel sorry that the show’s coming to an end, he will still do his best till the end.TV drama series “SungKyunKwan Scandal” have started various trends, with nicknames like Micky SeonJun, Charming Geol-oh, Attractive Joong-ki, Demonic Yu-Rim. Responses from the viewers are very overwhelming.
Source: Han-Xing News TV Daily+TVXQBaiduTranslation: halo92 @ OneTVXQ.comCredits: OneTVXQ.com { One World. One Red Ocean. One TVXQ! }Feel free to repost, but please leave the full credits intact. Thanks!
Posted by JYJisJYJ