[TRANS] 101031 JYJ kept joking with each other, JaeJoong is said to have a "poisonous tongue"

During the media interview in Taiwan, the three members kept joking with each other and even continued talking about the drinking issue that was mentioned at the Showcase.This is the first time that they have released an English album, so you can say that they were recording and learning English at the same time! And so receiving this album was the happiest thing this year for them. The 3 members had an extremely good relationship with each other and kept on making jokes during the short 30min interview, especially when talking about the issue of drinking alcohol. They always go out to drink on their own, but JaeJoong said that because Junsu doesn't really drink and does not pay, they have started to stop inviting him along. At this point, Junsu cut in, saying, "almost 80% of the bill is for the drinks!". JaeJoong could not resist replying, "the snacks that we eat while drinking are even more expensive than the alcohol!".It was also asked which member had the most "poisonous tongue". Junsu and Yoochun pointed at JaeJoong and even JaeJoong himself admitted that his comments are rather sharp. 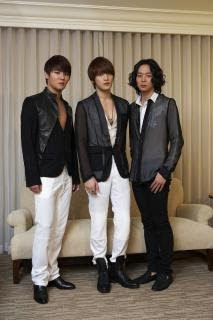 Other then talking about the new album, the various individual projects each member had undertaken were also discussed and each member was asked about any lasting impresssions they had. Yoochun talked about filming SKK Scandal; there was a scene on the water which was supposed to be very emotional but his entire headpiece dropped off causing the emotional scene to become a funny one.And Junsu said the musical he was in was a refreshing experience. At this point JaeJoong joked again, saying, "I went with Yoochun to watch Junsu's musical, but we sat too back and could only see his head.". {LOL!}JYJ were very cautious when answering the questions and most of the questions had to be based around "this year's" JYJ activities. There were also some they tried not to answer. When JaeJoong was asked about the meaning of his tattoo, he just briefly remarked that it was to commerate the launching of his career that year.And with regards to them starting to tour various countries, JYJ said that they would like to learn more languages to be able to communicate better with the fans.
Credits: Yahoo TaiwanTranslated by: christabel88@DBSKnightsShared by: DBSKnights
Reup by: atenjaejoong
Posted by JYJisJYJ