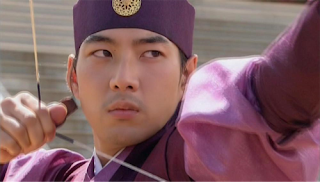 Actor Song Il Guk cheered for the drama “SungKyunKwan Scandal.”
Song Il Guk wrote on his Twitter on the 18th, “I watched every episode of ‘SungKyunKwan Scandal’! Nowadays, new actors’ acting skills are very interesting. There was such a difference when I was a newbie~ ^^;”
Later on, Song Il Guk said, “After writing and writing, I feel that I am showing off my acting skills instead”, “It’s not like this, I had understand more towards the acting field, and at the same time, it was getting more and more difficult.”
Fans of ‘SungKyunKwan Scandal’ replied saying, “I felt honoured that King Chumong also watched ‘SungKyunKwan Scandal’ as well”, “It was nice of you to be humble towards new actors”, the responses were enthusiastic.
Song Il Guk had also acted in the following late era dramas — “Chu Mong” and “Land of Wind.” He was also appointed as the ambassador for Gukgung on the 24th.
T/N: Gukgung (국궁/國弓) is a name for Korean archery, a traditional Korean martial art.
Source: TVXQBaiduTranslation: nings @ OneTVXQ.comCredits: OneTVXQ.com { One World. One Red Ocean. One TVXQ! }Feel free to repost, but please leave the full credits intact. Thanks!
Posted by JYJisJYJ