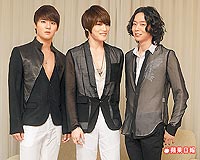 Dong Bang Shin Ki’s trio, JaeJoong, Yoochun and Junsu, have formed their new unit JYJ after leaving ex-agency SMEntertainment, keeping minimal contact with the two members Yunho and Changmin who stayed behind. JYJ was reluctant to discuss about their past in Dong Bang Shin Ki as JaeJoong said, “Can we talk about this year? This year has been great.”In actual fact, he has a tattoo of “TVfXQ SOUL (DBSK soul)” on his back, and it is nearly impossible for him to rid of the shadow of DBSK.Last night, the trio held their first showcase in Taiwan under the name “JYJ” in Taipei Nangang Exhibition Centre, attracting more than 5000 people. After going through the legal dispute due to the termination of their contracts, the trio now has stronger friendship with each other. Before the interview yesterday, JaeJoong revealed a new tattoo saying “MICKY JUNSU” on his lower back. Yoochun also tattooed JaeJoong and Junsu’s name on his chest, but both did not include names of Yunho and Changmin.JaeJoong and Yoochun’s Soul Mate TattooAfter the trio filed for the lawsuit to terminate their contract, the group “Dong Bang Shin Ki”, which the members debuted under 7 years ago, ceased. When asked about the happiest and saddest event that happened since debut, JaeJoong paused and asked, “Can we talk about this year?” Apparent that he does not want to bring up the past, he casually commented that the happiest moment was when they first received their new album.Yoochun and JaeJoong, who both likes tattooing, tattooed the name “TVfXQ” on their backs. Afterwards, both added on “Soul” and “Mate”, which makes up “TVfXQ Soul Mate”. It seems like it is extremely difficult for them to forget their past.Yesterday, before they left Taiwan in afternoon, 600 fans, who were at the airport to send them off, shouted, “Don’t go!” the moment they saw the trio. 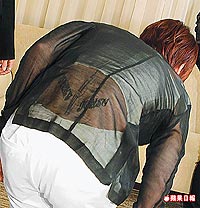 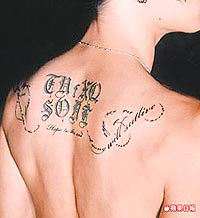 4 JYJ’s ‘Most’ List, 2 of which is JaeJoong.One who has most tattos: A total of 9/JaeJoongOne who can drink (alcohol) the least: Get drunk easily, have mostly never paid the bill before/JunsuOne who is the laziest in bed: The latest to wake up, tend to have morning temper/ YoochunOne who has the sharpest tongue: even he admits to it/JaeJoong
Source: Apple DailyTranslation: halo92 @ OneTVXQ.comSpecial Thanks: geniebmusic @ OneTVXQ.comCredits: OneTVXQ.com { One World. One Red Ocean. One TVXQ! }
Posted by JYJisJYJ