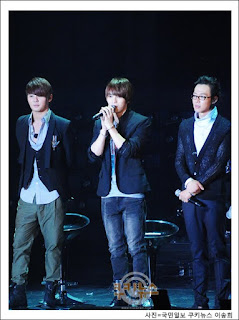 JYJ, whose three members are formerly from the group TVXQ, have been nominated to perform at the ’2010 KBS Drama Acting Awards’.Lee Kang Hyun, the KBS Drama EP, met with our reporter at a restaurant in Seoul on the 7th and stated, “It is true that JYJ have been written down for consideration as singers invited to perform at the 2010 KBS Drama Acting Awards,” but kept cautious as he said, “However, it has not been confirmed or finalized yet.”Following this, he explained that, “If JYJ do appear on stage, they will sing one song just like all the other singers,” and “JYJ’s side asked if JYJ could sing two songs, the ‘SungKyunKwan Scandal’ O.S.T ‘Found You’ and another group piece, but they cannot sing more than one song as we must keep it fair for all singers.”(omitted)
Source: [kukinews+DNBN]
Translation credits: jeeelim5@tohosomnia.net
Shared by: tohosomnia.net
Do not remove/add on any credits
Posted by JYJisJYJ