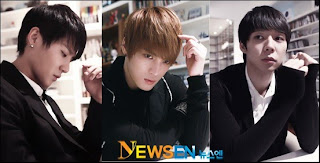 JYJ will be appearing on KBS’s “Live News Time” on December 30th.Prain representatives spoke with Star News and revealed on the 28th, “The trio of JYJ will be appearing on KBS’s news program for the 30th at 8 AM in order to talk about their U.S. activities and show their determination for the new year.”Continued news of the trio’s broadcast appearances have been delighting fans, especially with their upcoming Korean album release, which contains songs written entirely by them.A world tour is currently in discussion for their international promotions.
Source: Star News via NateCredits: AllKpop
Shared by: The Beginner
Posted by JYJisJYJ