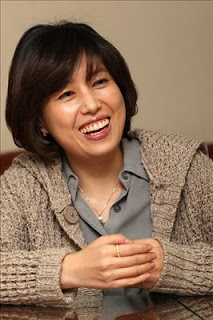 'SungKyunKwan Scandal' Screenwriter: "I had no idea who Park Yoochun was, but his acting turned out to be excellent! I'm now his fan."Screenwriter for KBS2 drama 'SungKyunKwan Scandal' Kim Tae Hee (37) said, mentioning Park Yoochun who acts as Lee Seon Joon in the drama. Her cellphone ringtone right now is TVXQ's 'Mirotic'.Currently a member of JYJ, Park Yoochun or 'Micky Yoochun', which is more famous than his original name, has smitten a lot of people in becoming his fans, just like Kim Tae Hee, through his acting in 'SungKyunKwan Scandal'.Park Yoochun entered into the acting realm and received high praise beyond expectations, adding a large number of fans besides those from his singing. More importantly, with the influx of women aged 30-40 into the supportive fandom, he has surpassed the world of idols and secured his foundations as a real actor.In the interview on the 30th, Kim Tae Hee said, "honestly, I originally wasn't really satisfied with the choice of actors, but I didn't say anything. But because I have a personality that shows on my face how I feel on the inside, it got to the point where Yoochun and I were rehearsing the lines, and he would ask me 'Teacher, why do you dislike me?' But I really like him now, and I feel so proud of him!"She also said, "of course, he isn't completely perfect with the pronunciation and enunciation of words, he has an innate sense of emotions, perfectly interpreting Lee Seon Joon to be an elegant person. Also, he has a unique sense of humor, which really surprises me. His humor shines through sometimes, which turns Lee Seon Joon into a 'really cute and interesting fellow', instead of a 'rigid and annoying fellow'. Also, there are times when he has a side that stimulates my maternal feelings.""What really makes me like him is his constant improvement in acting. I do hope he will continue acting, and I think he realizes this himself. He is a very wise person.""Yoochun knows why he needs to act in a historical drama. If a singer comes out and acts in a modern drama, there won't be that much of a difference with his usual singer activities. Only when one acts in a historical drama will the feeling and image be different, separating Micky Yoochun from his acting identity. Later on I found out that he was clear of this, which was the reason why he chose this drama."
Source: [baidutvxq]
Translation credits: Supernike911@tohosomnia.net
Shared by: tohosomnia.net
Do not remove/add on any credits
Reup by: atenjaejoong
Posted by JYJisJYJ