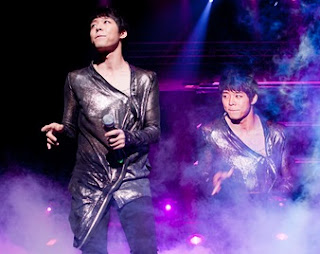 The second stop of the JYJ concert in Las Vegas kicked off at around 8:30 p.m. It took place at the Planet Hollywood Theatre of the Arts and was hosted by MCs Arden Cho and Shane Yoon. With a turnout of over 5,000 attendees, many fans, both young and old, came from as far as Europe and Asia just to see the trio perform in Las Vegas. Many of the Cassies awaited eagerly as the sea of red glowsticks waved and chanted to bring the members out.

JYJ first got the crowd going as they arose from the stage and opened with Empty. Jaejoong, Yoochun, and Junsu moved effortlessly with their dancers and put on a stellar performance.

The next song, Be The One, kept the atmosphere going up as the lights and stage moved with every beat of the song. After the second song, a short video intermission displayed on the screen showing the members writing messages of appreciation to the fans on a mirror. 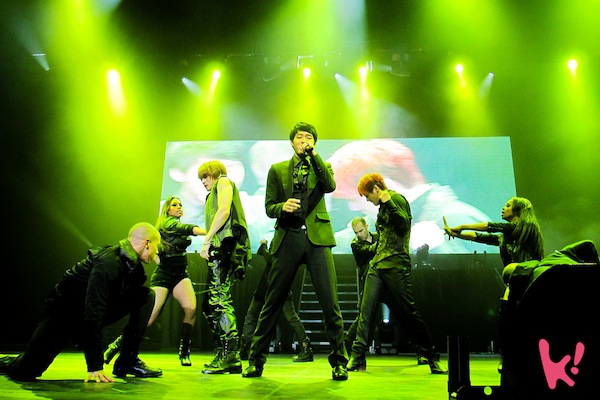 JYJ's slow ballad, Be My Girl, awed the fangirls as everyone waved their glowstick, hand, or cell phone. Soft purple lights covered the stage, creating a luminous and peaceful effect.

The fans were then treated to another video of members during rehearsal and production in LA during the summer in preparation for the tour and closed with the quote, “This is a very special project to us.”

Question: How has the tour been? How has America been treating you?
Yoochun: Since so many of the fans have been cheering us on, we’ve been having a great time.

Question: Are you guys going to make a music video for Empty?
Yoochun: Of course, yeah. Probably next month we’re going to tape it in the U.S.

Question: Can we get an idea of what the video will be like?
Yoochun: That’s top secret. Actually, that’s a second secret. (His answer drew laughter from the audience as they wondered how many secrets Yoochun has.)

Question: Do you have plans for another tour since so many fans seem to be interested?
Junsu: Hopefully we’ll plan a Europe tour, nothing is set in stone yet. But if there’s enough fan response, we’ll definitely set something up.

Question: What did you do last night in Vegas?
Jaejoong: We, uhhh, actually went to a club with the staff *laughs*
Yoochun: Yeah, we were “practicing” for tonight… (This caused fans to laugh because both members answered the question differently.)

Question: A lot of fans give you guys gifts, what’s the most memorable gift a fan has given you?
Junsu: We get so many gifts, but the ones that stand out the most to me are the drawings.
Jaejoong: Underwear…thongs… (Fans squealed at his response.)
Yoochun: Special gifts like…the fan’s love… (The fans said 'aww' in agreement.)

As JYJ wanted to also sing a Korean song, they incorporated Found You from Yoochun’s Sungkyungwan Scandal OST. The fans also waved along as JYJ’s sultry voices filled the auditorium.

The stage suddenly changed with their title track, Ayyy Girl. Afterwards, JYJ thanked the fans with “We appreciate your support and love. We want to meet you guys more!” which caused the fans to explode with joy and excitement.

The last song had the crowd jumping as red and white streamers exploded from the stage and white confetti fired into the air. Their Empty remix definitely was a great note to end the showcase. Fans screamed for an encore as the three members exited the stage. Then the music video for Ayyy Girl played on the big screen as the last part to the show. Finally, the MCs Arden and Shane walked out to close out the concert.

For those who missed our recap of the showcase on Friday, check out the JYJ World Tour: New York Showcase Recap & Photos article!

Unfortunately, we did not have our photographers for the Las Vegas event. So, to make up for this, we've included some bonus photos that we have not released before from the New York Showcase!

Note: We will have our photographers attending the Los Angeles Showcase!
credit to: koreaboo
shared by: atenjaejoong