One SYC admin, Sammy got herself stuck in the same elevator with Jaejoong and Yoochun while the boys were heading to the showcase venue. 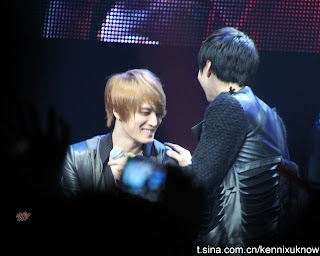 I was helping out with handing out lightsticks, but a spur of the moment thing I decided to walk to New Yorker to see if I have any lucky. But by the time I got to the lobby, all the swats there were filled with fans, I didn’t want to look suspicious and got on the 1 out 11 elevators.
I pushed for level 29 just for the sake of it, it wasn’t even the floor to our room. So there was a lady with her 2 kids and her mom there looking for a room. I tried to help them and said I would go done with them since I didn’t need to go to the 29th floor. So on the way down, the elevator suddenly stopped. I didn’t think too of it but thought it would be amazing if JYJ got in.
Then an Asian guy got in, he stood next to me, and right behind him was JAEJOONG!
Gosh I couldn’t believe it at all! But Yoochun also got in and stood right in front of me by Jaejoong!
The manager reached over to close the doors, so he blocked me from them, he step back to stand beside me after that so he let me have a great view of soulmate! At this point I was trying not to completely freak out and spazz, so I told the lady that I’m trying to help “I… Hope… Everything works out” in very very broken English, I was stuttering and getting my words mixed up because I was so distracted! I was still trying to figure out if they were real or not! I had the best view of Jaejoong because of where I was standing, and he absolutely GLOWED!
I couldn’t believe they were real! So when I talked to the lady, I probably made my presence know to them. Jaejoong then turned around to talk to the manager beside me, his sight had to go through me then to the manager by the way he turned around slowly. Omg, it took me a couple of seconds to realize this perfect being in front of me was speaking! I got hear him speak in real life! He was no more than 2 foot away from me, and Yoochun was just millimeters in front of me. Then they got off with Yoochun first, the Jaejoong, them the manager. I wanted to get off too and follow them, but I was literally stuck to my spot trying to comprehend it! But once I got out of elevator, I couldn’t even stop spazzing! I turned on my phone at this time and saw it was exactly 2:43pm in New York! I almost cried when I got back to help out with the event. Everything I did was purely random, yet the outcome was more than amazing!
The boys got off on the 20th floor, in the moment I saw Yoochun walking towards the door, I thought they were going to their hotel rooms! But then I went to that floor later on and saw it was more elevators for places other than hotel rooms. I think they were on their way to the showcase venue. A girl showed me tweet picture of OneTVXQ, of JYJ getting ready. Jaechun were wearing exactly the same thing they did I’m the elevator!
credit: sharingyoochun.net
shared by: atenjaejoong
Posted by JYJisJYJ