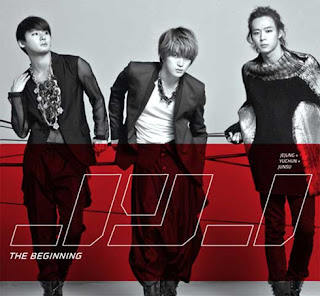 Breaking the prejudice of ‘Idol’s origin’, showing the possibilities of an all-rounded entertainer.
This year, on the 26th of January, in Seoul’s Sejong Cultural Center, it was the day that Kim JunSu turned into a musical actor from a pop idol singer with his debut performance in ‘Mozart!’. The 3000-plus seats were packed, the ticket responses showing an unprecedented degree of enthusiasm.
After the 2 hour and 20 minute performance ended, a person from the entertainment industry who was seated in the audience said, “His artistic talent is really unlimited, a thumbs-up.”
And after 10 months later, the initial individual praises for Kim JunSu now falls onto the members of JYJ (JaeJoong, YooChun and JunSu).
▲ Park YooChun’s acclaimed acting in ‘Sungkyunkwan Scandal’
At first when news of him challenging historical dramas surfaced, many people were doubtful. Some people even said that it was an unnecessary challenge, even if it’s a historical drama with modern colors, to people with such strong images such as him, it is obviously too difficult.
Adding on to the fact that he had stayed so long in the US, it was unknown whether he would be able to use the right accents and pronunciation necessary in a historical drama. Would he turn out to be like the majority of idol singers who turned into actors who want to experience acting through a challenge? From the start, concerns like this have already existed.
However, using sincere eye expressions and a steady deliverance of his lines, along with his acting surpassing expectations, he has received the praises of the audience, having the reputation of being the ‘model of all idol singer-turned-actors’. Especially, along with superb actors such as Song JoongKi, Park MinYoung, Yoo Ah In and others, he acted out perfectly the friendships, love and frustration of a Sungkyunkwan scholar.
Appearing in ‘Sungkyunkwan Scandal’, numerous topics of discussion have emerged, and also getting the audience to support ‘Sungkyunkwan Scandal’ enthusiastically, yet another achievement is the unearthing of a new actor named Park YooChun.
▲ Becoming the musical world’s talent who is cherished by all through ‘Mozart!’, Kim JunSu
When the news of him going into the musical stage emerged, compared to a welcome, negative expressions emerged.
Due to the many singers recently challenging musical acting and failing in the box office, the public opinion of the outside world has not tested its invitation of some stars who have received much criticism for being in musicals.
He who has no acting experience, will be he be able to coordinate with the other actors on stage, would be able to have an emotional communication with the audience down-stage, would he be able to digest this type of musical, many people questioned. Also, when there is an error in the lines or movements, as a newcomer, what would his reactions be like, these are concerns that people had.
But, as soon as the performance started, all doubts immediately vanished. He movingly acted out the life of the musical genius Mozart, who had a thirst for freedom. In this piece of work, through his fine acting performance and voice, he has the audience hypnotized. A Mozart who wears jeans, he used his own interpretation of the conflict and struggles experienced by a child prodigy a few centuries ago.
As a result, at the ’4th Musical Awards’ held in June and at the ’16th Korean Musical Awards’ in October, he won two awards: Best Newcomer Award and the Most Popular Award. In winning these two big awards at the same time, he is the first person.
In the musical market, there will never be people who will relegate him as a ‘product’ who only has a scary influence on the box office again. He is undoubtedly the greatest achievement for the Korean musical world in 2010.
▲ Attracting people’s attention, Kim JaeJoong in ‘Sunao ni Narenakute’
Compared to YooChun and JunSu, his activities in the country are less. However, a cable TV station is going to broadcast his debut Japanese TV drama series ‘Sunao ni Narenakute’, and I believe this will let fans quench their thirst.
In actual fact, the first member of TVXQ to start acting was him. Last year, in ‘Heaven’s Postman’ where he collaborated with Han Hyo Joo which started many topics of discussion, his acting deserves to be reaffirmed, and with more steady acting skills, he starred in ‘Sunao ni Narenakute’.
Japan’s public opinion on the evaluation of his acting is good. In the drama, he is a medical device salesman who feels the pressure as a result of poor sales, has digested fluent Japanese lines, and also amongst Ueno Juri, Eita and other Japanese actors, his acting skills are no less. Ueno Juri praises him as a person who cares about others, and who is also a insightful actor.
Unfortunately, due to going all-out in JYJ’s group activities, for a short period of time, we will not be able to see his activities as an actor in the country. However, he has stepped up into the ranks of actors, what kind of work piece would the next step bring? Now, it is already being anticipated.
After the JYJ members have completed their individual activities, in a period of time the group activities would be going all-out. On the 30th of October, they have successfully completed the Taiwan stop of their world album ‘The Beginning’ showcase, and will go on to their US activities.
Recently, the critics who have praised Kim JunSu in January at the Sejong Cultural Center, have also poured praise over all the members of JYJ.
Source: TodayKorea + DNBN + Baidu MickyYooChun + Hey!JJ
Translation: tvxqhwaiting @ OneTVXQ.com
Credits: OneTVXQ.com { One World. One Red Ocean. One TVXQ! }
Posted by JYJisJYJ