hi..i'm aten.the owner of this blog.i'm so in LOVE with JYJ..but not TVXQ..in TVXQ century,i just admire JAEJOONG & XIAH for their voice.but after JYJ(the trio) filed lawsuit towards SME..then,i just wish they will succeed outside of the company.
i'm not CASSIOPEIA..but i really LOVE JYJ.hihihi..i dont know what can i pronounce me..hihi..
"THE BEGINNING" is a great success for JYJ.the album is great contain a very good song.now,i'll start introduce the boys,JYJ to all of u who just started to love them just like me.. 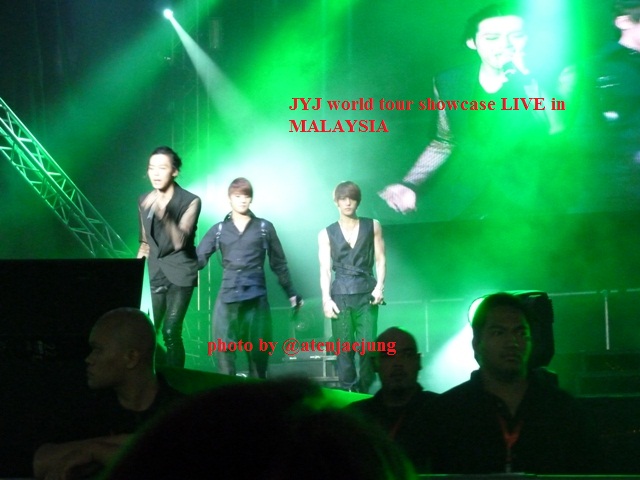 "J"..the first J is refer to Jaejoong.Kim Jaejoong (born January 26, 1986-actual birthday-Feburary 4, 1986),jaejoong was born as Han Jaejoon in Gongju, Chungcheongnam-do, South Korea. At a young age, Jaejoong was given up for adoption by his birth mother to the Kims and his name was changed to Kim Jaejoong. When he was fifteen, he moved to Seoul by himself in order to take part in the auditions held by SM Entertainment. Life in Seoul proved to be hard for jaejoong and he had to take various odd jobs to pay for rent. He once took on a role as a soldier in the movie Taegeukgi Hwinallimyeo (태극기 휘날리며); he then used the money acquired from the job to buy gum, which he sold to a female employee at a supermarket.

Jaejoong auditioned at SM Entertainment in 2001 and was accepted into the agency.On December 26, 2003, he debuted with TVXQ at a BoA and Britney Spears showcase.Apart from the group, Jaejoong has worked on solo activities. He sang, "Insa" (인사 lit. Greeting), for the soundtrack of A Millionaire's First Love.Jaejoong collaborated with label-mates The Grace for the Japanese version of song "Just for One Day", which was featured on their fifth Japanese single and their debut album, Graceful 4.Jaejoong also sang the solo track "Maze" which was for the fifth and final single in the Trick project, "Keyword/Maze".Jaejoong wrote and composed "Wasurenaide" (忘れないで lit. Don't Forget?) which included on TVXQ's twenty-fifth single "Bolero/Kiss the Baby Sky/Wasurenaide", as the last two A-sides.The song later appeared on their fourth Japanese album The Secret Code, along with another song which he composed, "9095".For TVXQ's fourth studio album, Mirotic, Jaejoong wrote and composed Saranga Uljima (Don't Cry My Lover) (사랑아 울지마).In 30 September 2009, he and Micky released a self-written duet, "Colors (Melody and Harmony)/Shelter," which was used as the image song for Hello Kitty's thirty-fifth year anniversary.
Along with the other members of TVXQ, Jaejoong has starred in two televised programs, Banjun Theater and Vacation.He is set to feature in an episode of Japanese-Korean joint television drama, Heaven's Postman (천국의 우편 배달부).It is about a mysterious man who delivers letters to heaven for people who can’t forget their deceased loved ones. His co-star is Han Hyo Joo.On March 9, 2010 it was announced that Jaejoong was cast in the Japanese television drama Hard To Say I Love You (Sunao ni Narenakute 素直になれなくて?) where he portrays a "doctor", who moved from Korea to Japan with his younger sister, working for a medical equipment manufacturer.
in September 2005, while rehearsing the dance steps for "Rising Sun", Jaejoong ruptured his cartilage in his knee and was admitted to a hospital in Seoul.He underwent surgery on the same day to repair the tissue.
On April 7, 2006 at 1:20 AM, Jaejoong was pulled over in his father's friend's BMW by a police officer on his way home from the Renaissance Hotels. He was ordered to take a breath test and his level of alcohol was revealed to be 0.071%. After spending 20 minutes at the police station, he was released. Due to violating traffic laws, Jaejoong was temporarily suspended from all TVXQ activities and had his license taken away for 100 days.
On November 21, 2006, a man with the surname Han filed a lawsuit against Jaejoong's guardians. Han claimed he was Jaejoong's biological father, and thus wanted parental rights.
Han cited the reason for the lawsuit against Jaejoong's legal guardians as "for not going through the proper procedures before registering [Jaejoong] in [the legal guardians'] custody." He divorced Jaejoong's biological mother in late 1980s, and gave up his custody over his child, leaving him under Mrs. Han's custody. However, he had found out some years ago Hero had been raised by a third party, not his biological mother. A DNA test was to be performed in order to prove validity of Han's claim. Many legal consultants comment that since the adoption had taken place correctly according to the corresponding law, no legal change will be involved regardless of the outcome.
The first hearing was to be held in Jaejoong's hometown, Gongju, on November 29, 2006. But on November 22, Han dropped the charges against Jaejoong's legal guardians. Han said that he originally intended to resolve his biological son's military duty conflicts after being informed of dual citizenship by Ministry of Military Affairs, which involved verifying the fact that he is the biological father. He did not expect his intention to lead to such a scandal, and states that he was scarred by speculations that he wanted to take advantage of Hero's fame.
In reaction to the matter, Jaejoong uploaded a journal entry on his official fan club website, and said that he was informed of the existence of separate biological parents by his mother two or three years ago, and it had been quite a shock to him. With his current mother's support, his biological mother has been able to keep in touch with him, and to meet occasionally, but whereabouts of his father had been unknown.
He vigorously expressed his will to live by the name of "Kim Jaejoong," not by his birth name Han Jaejoon (한재준), and promised to be loyal to all four of his parents. He also said he did not want his family history exposed to the public due to this incident.
"Y"...stand for Yoochun.Park Yoochun (born June 4, 1986), better known by his stage names, Micky, Micky Yoochun (in South Korea) and Yuchun (ユチョン Yuchon?) (in Japan). He is a Korean singer-songwriter, composer, and occasional actor. 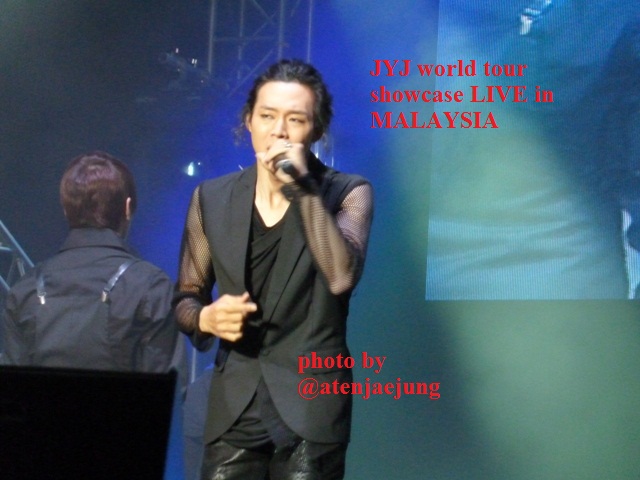 Micky was born and raised in Seoul, South Korea, until his family immigrated to the United States when he was in the sixth grade.He lived in Fairfax, Virginia, where he attended Holmes Middle School and Chantilly High School.He was scouted by Brothers Entertainment and went back to South Korea, where he joined SM Entertainment. He has a younger brother named Park Yoohwan.
Micky has appeared on two televised shows with his band-mates, Banjun Theater and Vacation.
In 2010, he will be starring in a KBS drama called Sungkyunkwan Scandal (성균관스캔들). He will portray Lee Seon Joon, a rich, smart student who falls in love with a woman who is disguised as a man.
Micky has written and composed several songs that have appeared on TVXQ's Korean and Japanese albums. As a member of SM Town, he contributed to the 2007 winter album Only Love with his composition "Evergreen". Micky also wrote and composed "Sarang Annyeong Sarang (Love Bye Love)" (사랑 안녕 사랑), featured on the group's fourth Korean studio album Mirotic.For the Trick project, he wrote the lyrics to his solo "My Girlfriend", entirely in English. "Kiss the Baby Sky", one of the A-side's for TVXQ's twenty-fifth Japanese single, marked the first time that one of the songs both written and composed by Micky was released on a Japanese single.
With band-mates U-Know and Xiah, Micky wrote the rap lyrics to "Love After Love", which appeared on their second Korean studio album, Rising Sun. For the group's Japanese releases, Micky wrote and co-composed "Kiss Shita Mama, Sayonara"(Kissしたまま、さよなら lit. As We Kiss, Goodbye?) with Hero for T, TVXQ's third Japanese album. In September 2009, he and Hero released a self-written duet, "Colors (Melody and Harmony/Shelter)", which was used as the image song for Hello Kitty's 35th anniversary.
the another "J" is junsu.Kim Junsu (born December 15, 1986; registered on January 1, 1987 in Gyeonggi-do, South Korea) better known by his stage names, Xiah (she-ah), Xiah Junsu (in South Korea) and Junsu (ジュンス) (in Japan). He is a South Korean singer-songwriter, composer,and occasionally an actor. 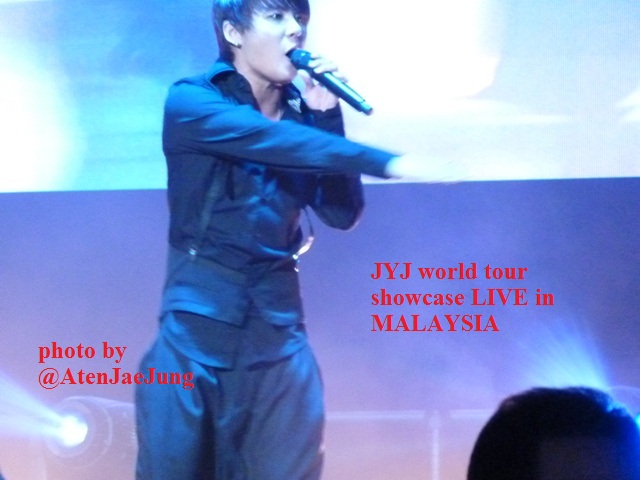 Xiah was born and raised in Gyeonggi-do, South Korea. He has an older fraternal twin brother named Junho, known as Zuno. He was the first member to join TVXQ. Xiah auditioned for SM Entertainment with best friend Eunhyuk from Super Junior. Eunhyuk didn't make the audition that year, but Xiah made it. Xiah joined SM Entertainment at the age of eleven. His first contract with the company began February 12, 2000. In 2002 he appeared on a television show called "2002 Survival Audition" with Eunhyuk and Sungmin, which was judged by two members from H.O.T., Moon Hee Jun and Kangta. Kangta praised him highly, saying that he had potential as a lead vocalist. Xiah debuted with the group TVXQ, during a BoA and Britney Spearsshowcase.He chose Xiah to be his stage name, explaining that the name was short for "Asia", as Asia is pronounced "ah-shee-ah" in Korean. "Xiah" would be an implication of his desire to become not only a star in Korea, but also a star recognized all throughout the continent.
In 2002, Xiah participated in the 6th Annual Starlight Casting System, which led him to be casted by SM Entertainment to take part in TVXQ. He also participated in Samsung's Anycall project, Anyband. The group consisted of label-mate BoA, Tablo of Epik High, and jazz pianist Jin Bora. The group has only released one single, "AnyBand". In 2006, he collaborated with label-mate Zhang Liyin, for her debut single "Timeless". Xiah wrote and composed "Nae Gyeote Sumsuil Su Ittdamyeon (White Lie)" (네 곁에 숨쉴 수 있다면), which was included on TVXQ's third studio album, "O"-Jung.Ban.Hap.. For the Trick project, he composed his solo "Rainy Night".Xiah also wrote "Noeur.. Baraboda (Picture of You)" (노을..바라보다), which was featured in the group's fourth Korean album, Mirotic. For the Tohoshinki 4th Live Tour 2009: The Secret Code in Tokyo Dome, Xiah performed his self-composed song Xiahtic in Japanese. In January 2010, Xiah started his stage musical career as the lead actor in the South Korean run of Mozart!.
After it was revealed that TVXQ would go on a indefinite hiatus in Japan, it was announced that Xiah would make a solo debut. He will release a double A-side single on May 26, 2010. A song that Xiah recorded titled "Kanashimi no Yukue" (悲しみのゆくえ The Whereabouts of Sadness?) will be used as the theme song for the Japanese drama5nen Atono Love Letter (５年後のラブレター Go-nen Atono Rabu Retā?, A Love Letter, 5 Years From Now). In May 2010, there was also a teaser released, showing Xiah's self-composed song called "Intoxication".
In October 2010, on a span of 4 days, Xiah is set to collaborate with Sylvester Levay on a musical concert called 'Kim Junsu Musical Concert, Levay with Friends'. It will be held at the Olympic Gymnastics Arena in Seoul. The tickets to the first day of this concert was sold out in 20 minutes.
Xiah has appeared on two televised shows with TVXQ, Banjun Theater and Vacation. He also made a guest appearance in Family Outing.