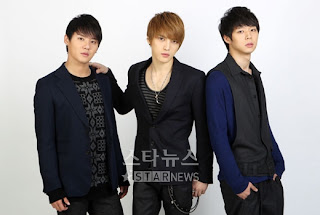 JYJ recently expressed their unfailing wish to promote together as a five-membered TVXQ.During an interview with Money Today Star News, JYJ expressed, “It’s disappointing for TVXQ to promote as two separate teams. It might be frustrating right now, but we want each other to do well.”It was recently reported that Yunho and Changmin will be releasing their first track after a two year, three-month hiatus under ‘TVXQ’ this coming January. However, Yoochun emphasized, “It’s still the same now, but all five are TVXQ members. Right now it’s not about who gets to use the TVXQ name that’s important.”Junsu added, “It’s complicated and disappointing for us too, but I believe that we’re both about the same. Even though there is an inevitable wall between us, we both still need to continue on with activities without shame.”Lastly, Star News asked, “Is there any possibility for TVXQ to get back together?” All three JYJ members stated, “If it is a problem we can solve ourselves, then we would solve it right now. We’re always open for the possibility.”
Source: Star News via Nate
Credits: allkpop
Shared by: The Beginner
Posted by JYJisJYJ